Omega-3 fatty acids seem like a cure-all for just about anything that ails patients nowadays. They’re hailed for promoting better heart health, reducing inflammation, providing more lustrous hair and skin, and even promoting better mood. The question is, how beneficial are omega-3s for dry eye patients?

Get a good brand of Omega 3

Some recent research has tried to pin down the specific effects of omega-3 supplementation on dry eye. In a pilot, double-masked study published in March 2011 in Cornea, investigators gave patients various doses of fish oil and flaxseed oil (TheraTears Nutrition, Advanced Vision Research, Woburn, Mass.) for 3 months. Investigators measured patients’ subjective symptoms and tested for tear breakup time and corneal staining as well as performing other tests.
Of the 36 patients included, 70% of the patients receiving treatment became asymptomatic. In the placebo group, 37% of the symptomatic patients became asymptomatic. Schirmer’s testing and fluorophotometry seemed to indicate that omega-3 use increased tear secretion, according to investigators. Although those results are promising, they only begin to reveal how omega-3 might help dry eye and which patients would benefit the most. At the 2012 ASCRS•ASOA Symposium & Congress, Frank A. Bucci Jr., M.D., founder, Bucci Laser Vision, Wilkes-Barre, Pa., presented the results from a study sponsored by Physician Recommended Nutriceuticals (PRN, Plymouth Meeting, Pa.), which makes PRN Dry Eye Omega Benefits. The multicenter, blinded, randomized study randomized 60 patients to receive the PRN product, a Nature Made omega-3 product (Pharmavite, Northridge, Calif.), or TheraTears Nutrition. Investigators measured red blood cell membrane saturation of the omega-3 products at baseline, 1 and 3 months follow-up. Investigators found that red blood cell saturation was significantly greater for the PRN product compared with the other two products. Knowing how well an omega-3 product can be absorbed in the body is crucial in ensuring it will provide key health benefits to the eyes and elsewhere, Dr. Bucci said.
Although there have been other studies related to dry eye and omega-3 supplementation, there has yet to be a large-scale clinical trial that pinpoints how omega-3 fatty acids work to treat dry eye and what kind of dosing is appropriate.

Despite what research may find, what is key is how patients respond to omega-3 use. “It’s all meaningless if patients don’t feel better. Certain types of dry eye patients seem to benefit more than others from omega-3 supplementation. “I recommend fish oil mostly for evaporative dry eye.

We need a pharmaceutical-grade, mercury-free supplementation. “With a cheaper version, there’s more risk for contaminants. We’re recommending this at a high dose, so it’s essential to be safe,” he said. We prefer a higher quality omega-3 product that absorbs more quickly in the body, comes from fish sources versus flaxseed, and does not contain alcohol.
There has been recent talk in the popular press about krill oil as an omega-3 source that can be better absorbed by the body, some patients successfully use krill oil.
In the rare instances where a patient does not like fish oil, is allergic to it, or has another physician concerned about its use because the patient takes anticoagulant therapy, we recommend the use of flaxseed oil, which the patient can obtain as a gel cap or even sprinkle in powder form on food.

Our western food is very deficient in Omega 3 and full of Omega 6. This results in multiple problems in the body including dry eyes, hearth disease, 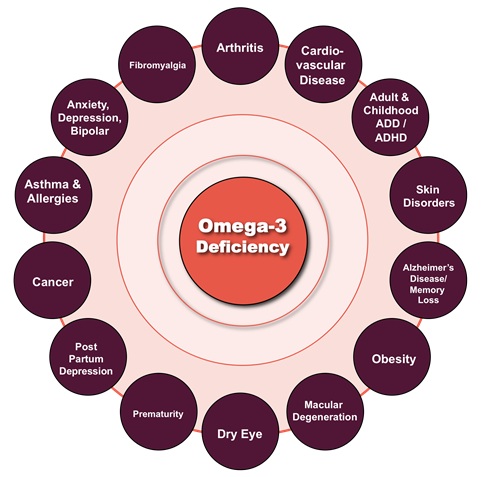 A fatty acid is a chain of carbon, oxygen and hydrogen atoms with a carboxyl group on one end. Fatty acids are classified on the basis of how many carbon atoms are in the chain, as well as how many double bonds exist within the molecule.

Fish contain a variety of fatty acids, but the ones that are believed to confer the majority of the benefits are the long-chain omega-3 fats eicosapentanaenoic acid (EPA) and docosahexaenoic acid (DHA). These omega-3 fats are found exclusively in seafood and marine algae.

As you can see from the chart below, it is also possible for the body to synthesize EPA and DHA from the short-chain omega-3 alpha-linolenic acid (ALA). ALA is found in plant foods such as flax, hemp and pumpkin seeds and walnuts.

However, research clearly indicates that the conversion of ALA to EPA and DHA is extremely limited. Less than 5% of ALA gets converted to EPA, and less than 0.5% (one-half of one percent) of ALA is converted to DHA.

A common misconception, especially amongst vegetarians and vegans, is that our need for EPA and DHA can be met by consuming flax oil and other plant sources of ALA. But the conversion numbers above clearly indicate that this isn’t the case.

Studies have shown that ALA supplements (like flax oil) are unable to raise plasma DHA levels in vegans, despite low DHA levels at baseline. (ref) So unless they are supplementing with an algae-derived source of DHA, it is likely that most vegetarians and vegans are deficient.

This is significant because researchers now believe that the majority of the health benefits we get from dietary omega-3 fats come from the longer chain derivatives (especially DHA, as I will explain below).

In fact, some researchers have proposed that DHA is essential. When scientists label a nutrient as “essential”, they they’re not just saying that it’s “very important”. In the context of nutrition essential means that the nutrient cannot be synthesized in the human body, and must be derived from dietary sources.

According to today’s nutrition textbooks, there are only two essential fatty acids, omega-6 linoleic acid (LA) and omega-3 alpha-linolenic acid (ALA). It is believed that as long as these fats are present in the diet, all of the longer-chain omega-3 and omega-6 derivatives can be synthesized in the body.

As I pointed out above, while this is theoretically possible, in reality the conversion doesn’t work well. This is true even for healthy people, but it’s especially true for those with nutrient deficiencies, because the conversion of ALA to DHA depends on zinc, iron and pyridoxine.

The bioavailability of iron in plant sources is poor compared to animal sources, so iron deficiency is common in vegans and vegetarians. This is another reason why they tend to be poor converters of ALA to DHA.

Several other observations support the hypothesis that DHA is essential:

It is possible that the primarily carnivorous diet of our ancestors, which ensured a consistently high dietary intake of DHA and AA, precluded the need to evolve efficient conversion mechanisms.

What about EPA? Isn’t it essential too?

EPA is another long-chain omega-3 fatty acid that is conventionally believed to be responsible for the benefits of fish consumption.

EPA is often referred to as “anti-inflammatory”. However, according to this report on essential fatty acids by Masterjohn, EPA’s effect seems to be more of an interference with the metabolism of omega-6 arachidonic acid (AA) than the performance of any essential role itself.

Take a look at the chart again that I linked to in the beginning of the post. The fatty acids in blue boxes are less inflammatory, and those in pink boxes are more inflammatory. The chart shows that AA is used to synthesize prostaglandins that cause inflammation (indicated by the pink box on the chart). Because it has the same number of carbon atoms, EPA competes with AA for the enzymes that metabolize it. Since the prostaglandins made by EPA are less inflammatory than those made by AA (indicated by the blue box), EPA is often referred to as “anti-inflammatory”.

But while EPA is certainly less inflammatory than AA, it doesn’t make sense that the body would require an essential fatty acid just to block the inflammatory effects of of another fatty acid.

By contrast, DHA is used to synthesize compounds that play an active role in resolving inflammation. EPA only makes these compounds in the presence of aspirin (PDF). EPA is thus likely to simply be a byproduct of compromised DHA synthesis.

What does this mean to you?

Putting all of this information together yields the following conclusions:

Dietary changes over the past century have lowered the DHA status to a state of subclinical deficiency in many people. Countless studies show that this deficiency is at least in part to blame for the rising incidence of cardiovascular disease, inflammatory disease, mental and psychiatric disorders and suboptimal neurodevelopment.

DHA is not the only reason to eat fish, which is also rich in selenium and vitamin D. However, DHA is likely to be the primary reason why populations that eat fish on a regular basis have consistently been shown to healthier than those that don’t.