AGING OF THE FACE

A stranger who wants to know another person’s age can either ask for identification or look at the person’s face, and the latter is less intrusive and almost as accurate. People are able to determine age from the face with surprising accuracy, to within a few years when the person judged is between 20 and 60, a skill that develops early in life when even babies can distinguish children from adults.

HOW THE FACE AGES 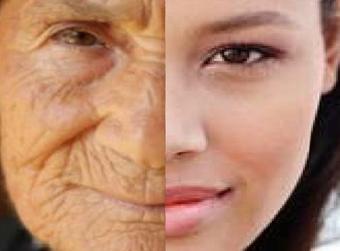 As the face matures, it changes some of its most enduring properties (e.g., shape of cranium) and acquires new attributes (e.g., wrinkles). These changes are the basis for information about the aging of the face. The greatest changes occur from infancy to puberty as the face and head mature into an adult form. The eyes, nose, and mouth features of the face expand to fill a relatively greater area of the surface of the cranium; the relative area occupied by the forehead shrinks as the eyes move up into this area; the eyes become proportionately smaller and the forehead slopes back more; the face becomes smaller in respect to the rest of the body; and the chin tends to become larger and more protrusive. Some of these changes may continue, but less dramatically, into adulthood, but other changes begin to occur to mark aging of the face and correspond to the decline of the face past the generative years into old age. The skin becomes darker, less flexible, rougher, and more leathery; lines, wrinkles, folds, pouches, and blemishes or discolorations gradually appear and/or become more pronounced; muscles and connective tissues change their elasticity; and fatty deposits and bone may be lost to produce pouches in the cheeks, bags under the eyes, sagging under the chin or a double chin, opening of pores, and other changes in the way soft tissues conform to the underlying bony structure. Changes in the vascular supply of the skin and in hair, oil and sweat glands usually occur. These changes are illustrated in the images on the right above. There are also changes in the movements and behaviors of the face as it ages, but little is known about these changes because they require a long research period to study. During aging of the face, fine control of the facial muscles is lost, similar to finger dexterity. 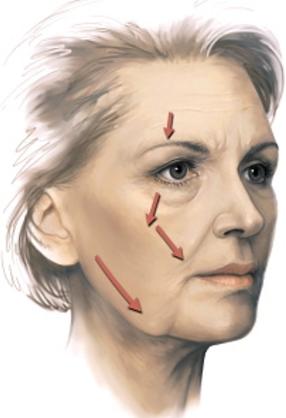 Despite the often dramatic changes in the face as it ages, the identity of the face is preserved throughout the person’s life. The elements of facial identity of each person can be detected from early childhood through old age, though it may be difficult to match a face using only the extremes of age, versus seeing the steps as the face develops and ages. The series of images at the right show the same woman at different ages, indicated in years below each image. The images show the effects of facial aging on facial appearance. There is a resemblance from age to age that can be seen even between the youngest and oldest image. Humans interpret this consistency in the appearance of the face as part of facial identity and the identity of the person. 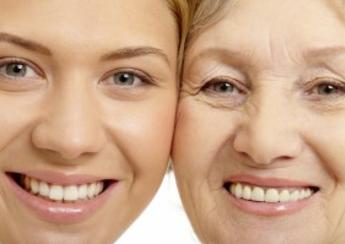 WHAT TO DO ABOUT WRINKLES

Wrinkles indicate age, and particularly for women, are seen as problematic for beauty and worth eliminating, if possible. One reason for minimizing wrinkling is that youthful women are generally viewed as more attractive by men. The best way to deal with wrinkles is to prevent or postpone them for as long as possible. One of the most important wrinkle preventatives is to avoid sunlight because the sun’s rays penetrate the skin surface and physically destroy tissues of the skin, which leads to wrinkling. If you seek a tan in the sun, you will without doubt pay for it later with earlier, deeper wrinkles. Tanning is caused by the sun stimulating production of melanin as a protective response against sunburn. Both tanning and burning are separate from the damage that occurs to deeper layers of skin tissues, which is caused by a different ultraviolet bandwidth. Sun screen products are generally ineffective in preventing this type of damage. Although darker skin types are less vulnerable to sunburn (though not immune), their response to the wrinkling action of the sun is not significantly different. If you must have a darker skin color, tanning spas may have lamps that do not emit the damaging rays (carefully evaluate this claim – they are not the burning rays that damage deep skin tissues), and there are pills and topical lotions that dye the skin to resemble a suntan. These alternatives will save the tan seeking woman many regrets over skin care.

Another recommended preventative approach to skin care is to eat a good diet that provides adequate nutrients for maintaining skin health, which can be supplemented with a multi-vitamin or specific vitamins for the skin. Vitamins that are claimed to have beneficial effects for skin health include A, C, D, and E. However, scientific evidence for the specific actions of these vitamins taken in supplemental doses for skin health (beyond their general antioxidant effect) is sparse.

Once you have wrinkles, there are some techniques for reducing them. Recently introduced creams and lotions are effective in reducing wrinkles. These wrinkle creams act by increasing the volume of tissue cells and smoothing out the wrinkle or line. Thus, they cannot eliminate deep wrinkles. See your physician or pharmacist when buying these creams because only some skin care creams and lotions have this action. The other, ordinary skin care cosmetic products may or may not help smooth your wrinkles, and generally act by covering or hiding them.

The face lift is a proven effective cosmetic surgery treatment for wrinkles, pouches, bags, and sagging skin. You should have severe wrinkling to warrant this expensive and drastic step. The surgeon literally pulls the skin tighter on the bones of the face. Because the skin continues to age, the signs of age will eventually return and another face lift will be needed. However, the elasticity of the skin decreases with age and its ability to respond well to the lift also decreases, so signs of multiple lifts eventually negatively affect aesthetic judgments of the face. Careful selection of physician is an obvious consideration for such a procedure; fortunately, this lucrative field attracts many competent cosmetic surgeons.

Recently, botox injections have become popular as a treatment for wrinkles. Botox is a inoffensive name for botulinum toxin, one of the most deadly biochemicals known, and a potential weapon in a future terrorist attack. Is this poison something you want to inject into your face without a highly compelling reason? If your answer is yes, then there are additional facts to keep in mind. This toxin acts by blocking neurotransmitters to the muscle, thus blocking muscular contraction. The blocking action has important medical uses for seriously ill people, and also has the side effect of reducing wrinkles that are the product of chronically tense or frequently contracted muscles. Since these muscles no longer contract (or are partially paralyzed), the wrinkles they produce are minimized. Thus, only wrinkles that are produced or enhanced by muscular actions are mitigated by botox; other wrinkles, lines and folds that are not primarily a product of muscle contractions will not be affected. Also, if the muscles that produce wrinkles also produce important functional actions that botox cannot be allowed to interfere with, such as movements of the lips, botox use is unwise. Thus, the primary site for using botox is around the eyes where loss (or partial loss) of muscular action will not cause functional problems. There are other practical problems in using botox as a wrinkle reducer. Its effects last only a matter of months, so subsequent treatments are required to restore its effects. Also, the body develops antibodies to it that reduce its effectiveness, necessitating stronger doses or more frequent treatments. If a person who has a resistance to botox someday needs it for serious medical purposes, the medical application may be thwarted. Overall, perhaps it would be better to seek treatment for the underlying condition that causes tense facial muscles. 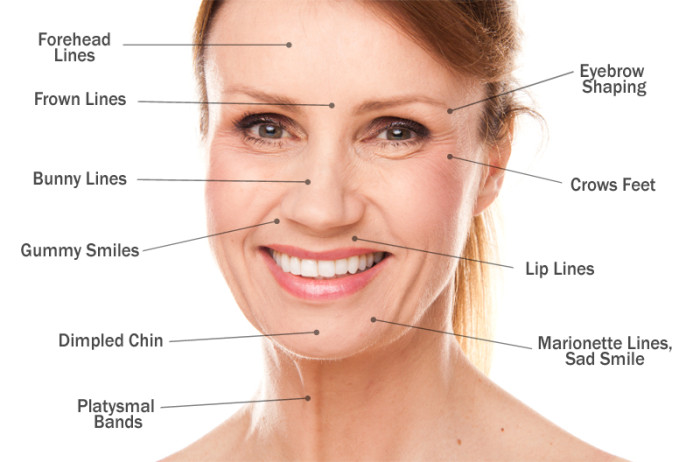