WHY IOL POWER CALCULATION MAY NOT BE ACCURATE AFTER REFRACTIVE SURGERY

As with any problem, the solution is easier when you understand the origins of the problem. After LASIK or PRK, IOL power miscalculation occurs due to three types of error.

Keratometers, corneal topographers, and any devices developed to measure corneal power use a standardized, fictitious keratometric index of refraction—usually 1.3375—to convert the measured radius of the anterior corneal surface into keratometric diopters, on the basis of the paraxial equation P = (n-1)/r, where P is the corneal power in diopters, n is the keratometric index of refraction, and r is the radius of curvature of the anterior corneal surface in meters.

The value 1.3375 dates back to the 19th century and is optimized so that a corneal radius of 7.5 mm corresponds to a corneal power of 45.00 D. Keratometers and topographers measure the radius of anterior corneal curvature, but the keratometric index of refraction posits a theoretical single refractive lens representing both corneal surfaces. It assumes a constant ratio of anterior to posterior corneal curvature. Such an assumption works well in virgin eyes; however, when the anterior corneal curvature has been altered by LASIK or PRK but the posterior curvature does not change, this ratio is disrupted, and the keratometric refractive index becomes invalid.

As a consequence, after myopic correction, keratometry (K) readings usually overestimate corneal power, and the IOL power is underestimated so that patients are likely to experience postoperative hyperopia.  Conversely, in hyperopic correction, corneal power is underestimated, IOL power is overestimated, and patients risk postoperative myopia.3 Usually, the higher the attempted correction, the higher the resulting under- or overcorrection. It has been shown that, after myopic excimer laser surgery, the keratometric index of refraction should be decreased proportional to the amount of correction in order to get a correct measurement of corneal power.  Alternatively, the keratometric index error can be overcome by measuring the curvature of both corneal surfaces using technologies such as Scheimpflug imaging or optical coherence tomography. 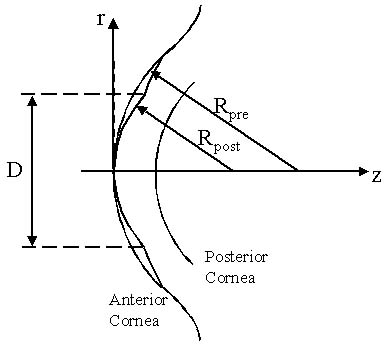 Third-generation IOL power formulas, such as Hoffer Q, Holladay 1, and SRK/T, use corneal power to predict the effective lens position (ELP). After myopic LASIK or PRK, the reduced corneal power leads to an underestimation of ELP, and this can further contribute to IOL power underestimation. The opposite effect occurs after hyperopic surgery. To address this issue, Jaime Aramberri, MD, developed the double-K method, which uses two K values: the prerefractive surgery K value for the calculation of the ELP and the postrefractive surgery K value for the vergence formula that finally calculates IOL power. 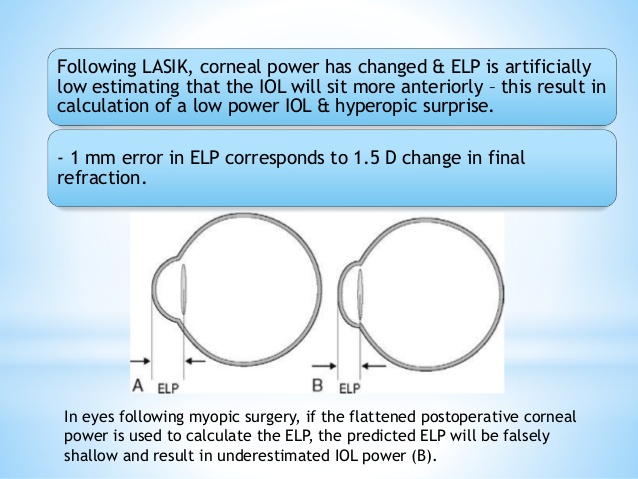 All of the errors described earlier also occur after radial keratotomy (RK). In these eyes, however, the keratometric index error is the opposite of that after myopic LASIK or PRK, as the posterior corneal curvature flattens more than the anterior corneal curvature after RK. Due to the small optical zone, the most relevant error in post-RK eyes is radius error.

Most IOL calculation methods for use after refractive surgery rely on pre- and postoperative measurements. Calculations are more accurate, and a larger range of methods can be used, when both the refractive change induced by corneal surgery and the preoperative corneal power are known. The refractive change is required by methods such as those developed by Masket and Savini. The preoperative corneal power is mandatory to calculate double-K formulas, as well as for the method described by Seitz and Speicher.

If these data are not available, the surgeon can still try to determine the refractive change by asking the patient the power of his or her old contact lenses or eyeglasses. The preoperative corneal power can also be estimated by measuring the postoperative posterior corneal radius; assuming that this did not change after surgery, one can calculate the preoperative anterior radius, which is, on average, 1.21 times greater than the posterior radius.

If these options are unavailable, the surgeon can rely on no-history methods such as those described by Shammas and Haigis.

A small or decentered optical zone is likely to generate a relevant radius error, as the corneal radii of curvature may easily be measured on the periphery of the optical zone, where the curvature is different from that at the visual axis. This situation can be detected only by corneal topography. Automated keratometers, including those integrated into most optical biometers, do not allow the surgeon to visualize the diameter and centration of the optical zone and are therefore insufficient for these cases.

I strongly encourage surgeons to acquire corneal topography images in these types of cases and evaluate the optical zone. Should the optical zone be small (< 4 mm) or decentered, the radius error makes most methods of calculating corneal power invalid. In this scenario, IOL power calculation based on ray tracing is likely the best option. 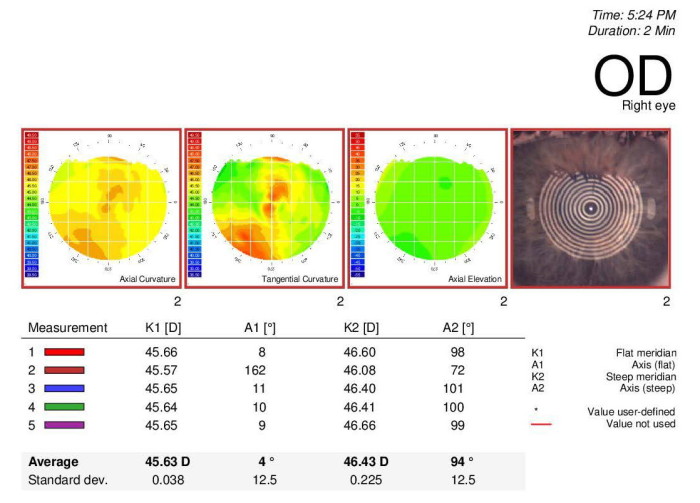 USE METHODS THAT HAVE BEEN VALIDATED

Many studies have investigated the accuracy of the methods described herein to adjust the corneal power and/or the IOL power in eyes with previous refractive surgery, although information about post-RK eyes is limited. For many years, the clinical history method was considered the benchmark for comparison and the gold standard. Subsequently, this method has been shown to lead to unpredictable results, probably because perioperative information is often unreliable.

Several other methods have been shown to offer poor predictability in IOL power calculation after LASIK or PRK. By contrast, some methods have been validated to be accurate and thus should be preferred. In an article currently in press, my colleagues and I demonstrated that, after myopic excimer laser surgery, the ideal method may vary according to the available data. The best results are likely offered by Savini’s method, using double-K SRK/T, when all perioperative information is available; by Seitz and Speicher’s method, with double-K SRK/T, when the preoperative K but not the refractive change is known; by Masket’s method, with SRK/T, when the refractive change but not the preoperative K is known; and by Shammas’ no-history method when no data are available.

In any case, good results can also be achieved with ray tracing. This method does not require any perioperative data and can also be used for small and decentered optical zones. Ray tracing has additional advantages compared with standard theoretical formulas: it takes into account corneal asphericity, posterior corneal astigmatism, any corneal aberration, and pupillary diameter.

At PVSC, the use optical coherence tomography (OCT) to measure corneal power and improve the selection of intraocular lens (IOL) power in cataract surgeries after laser vision correction is the preferred method to be used. Studies have found that the predictive accuracy of OCT-based IOL power calculation was better than Haigis-L and Shammas-PL formulas in eyes after laser vision correction.

It is no secret that the most frequent complaint from patients is that their postoperative results differ from what was expected. The available methods allow us to obtain good refractive outcomes in eyes with previous LASIK or PRK, but refractive surprises can still occur. For this reason, I always advise patients that IOL power calculation is challenging and that our refractive target may be missed. This rarely occurs, but I prefer to stay on the safe side by under promising and overdelivering.

Bilateral Same Day Cataract Surgery is becoming popular, however,   due to the inaccuracy of the calculations of IOL power, these patients has to be done as singles eyes with at least 2 weeks between the eyes to access the results of one eye and adjust the second eye accordingly.

At PVSC we take 3 scans per eye to average them out. Here is an example of a scan using the RTVue. 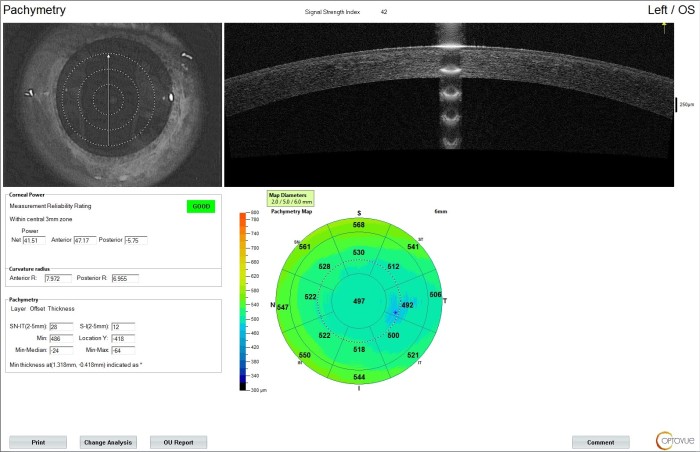 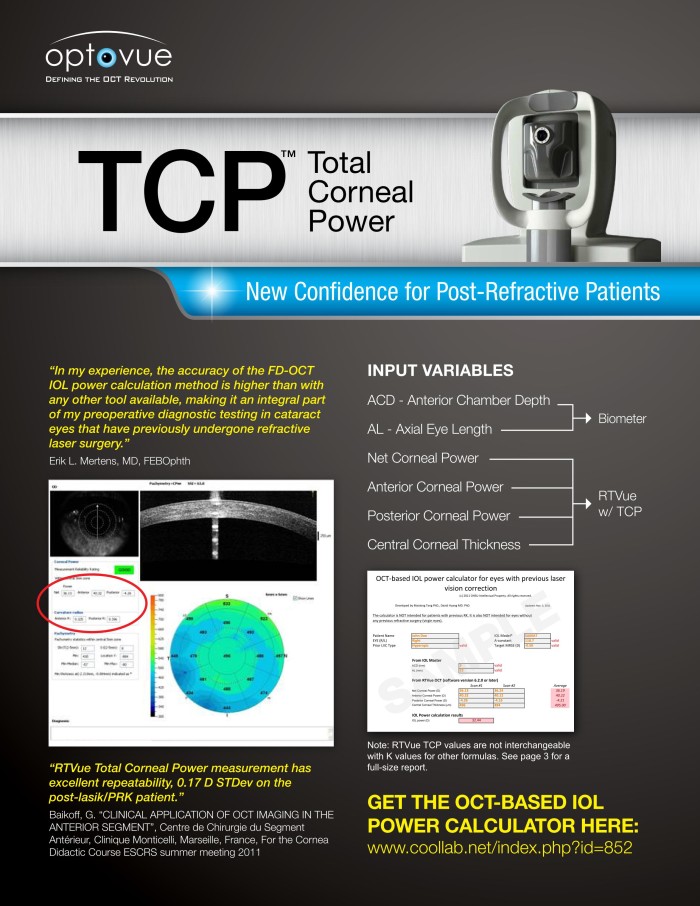 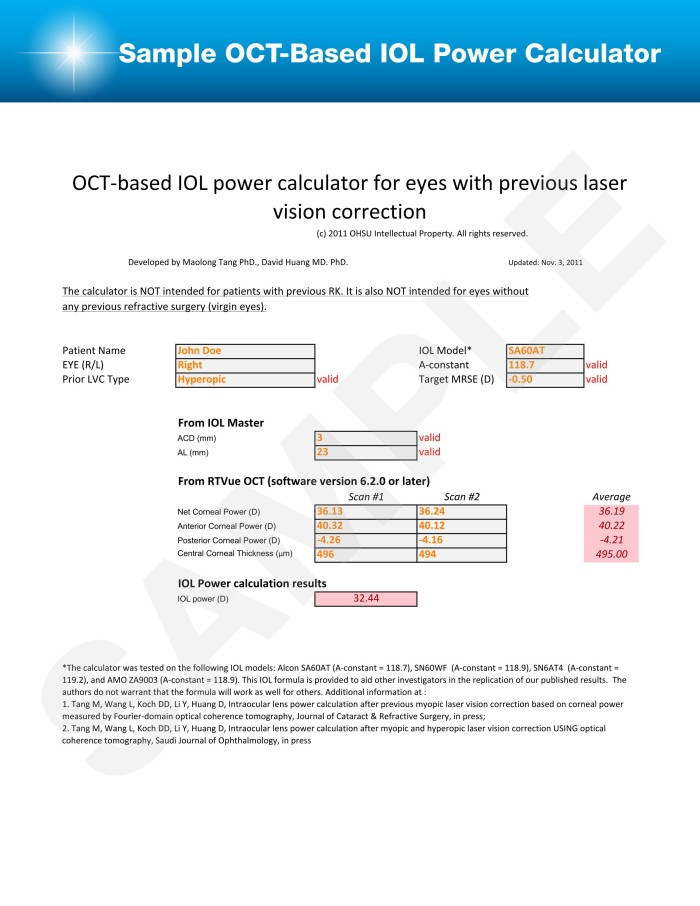